93% of American Adults are Unhealthy – A Deeper Dive

A recent report (2022 study) claimed that only 6.8% of American adults have optimal metabolic health.

Their analysis comes from data on adults in the United States age 20+ years that is considered to be representative of the nation – the National Health and Nutrition Examination Survey (NHANES) from 1999-2000 to 2017-2018.  It’s worth noting that this data precedes the COVID-19 pandemic, which has contributed to a worsening of obesity and presumably other measures, as well.

The 2019 study assessed the presence of the 5 criteria for Metabolic Syndrome, along with the absence of taking medication for each criterion:

How do these reports differ?

Let’s examine the difference in criteria utilized in the 2022 study (see figure): 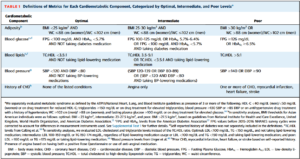 These points don’t necessarily invalidate the study.  Rather, it’s important to understand the limitations of each measurement and the potential impact that each one has on the results.

Optimal cardiometabolic health was defined as meeting the optimal criteria for each of the 5 metrics – adiposity, blood pressure, blood glucose, blood lipids, and absence of prior cardiovascular events.

Using these criteria, only 6.8% of adults had optimal cardiometabolic health.

There was little difference in cardiometabolic health by income, but adults with lower education were half as likely to have optimum health as those with higher education.

While I take issue with some of the metrics used to classify metabolic health, the overall message of the study is undeniably concerning.  The metabolic health of our nation is alarmingly bad, and there has been a steady trend toward worsening over the past several years.

The data in this study are consistent with the data in the 2016 study, thereby giving us a clear picture of the poor metabolic health of our country.

At what point are we willing to admit that our public health messaging is ineffective or, worse, wrong?  Perhaps we need to overhaul the Dietary Guidelines, which have been demonstrated to be unsupported by scientific evidence.

Regardless, given the absolute failure of our health “experts” to guide us effectively, it’s imperative that individuals be proactive about their own metabolic health.