Inflammation is not always bad

While we think of inflammation as harmful, it’s important to recognize that not all inflammation is bad.  Inflammation is triggered as a short-term protective mechanism against infection and as a mechanism for healing from injury.  Dietary factors can also trigger inflammation, and it is believed that chronic low-grade inflammation may drive metabolic disease such as obesity, diabetes, and cardiovascular disease.

One of the challenges in evaluating inflammation is assessing it.  The inflammation that we are aware of often takes the form of swelling, redness, and/or pain.   Inflammation at the cellular level is not perceptible to us as pain, and thus we rely on inflammatory markers in the blood such as C-Reactive Protein (CRP), a protein that indicates inflammation but does not differentiate between infections, injuries, etc.

The balance of omega-6 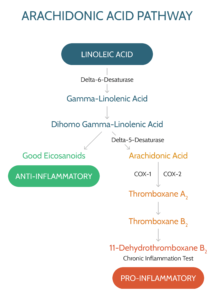 To simplify the explanation, it’s sufficient to know that the hormone insulin activates the conversion of linoleic acid (the most commonly consumed form of omega-6 fatty acids) into arachidonic acid (AA).  High levels of insulin (hyperinsulinemia) and insulin resistance are not only consequences of inflammation, but also cause inflammation, particularly in the fat cells.

To summarize the roles of these fatty acids:

It appears that hunter-gatherers ate fats at a ratio of approximately 2:1 to 4:1, while the Inuit eating mostly omega-3-rich seafood were at a ratio of 1:4.  Now, the omega-6 to omega-3 ratio in our modern diet is approximately 16:1.  This dietary trend is even visible in human fat stores of linoleic acid over time. 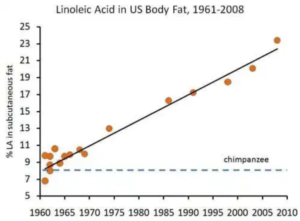 The following food items appear to cause inflammation: 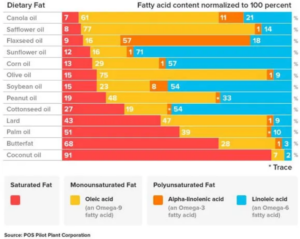 Research has shown that several popular diets are associated with reduced inflammation:

Though these dietary strategies cover a wide range of macronutrient compositions, the similarity among them is decreased intake of processed foods, which is likely the mechanism by which they decrease inflammation.  As is often the case, it’s often a matter of what’s not being eaten. 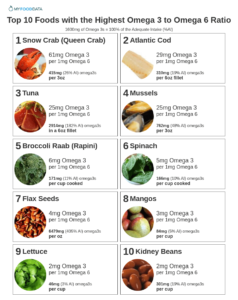 Rather than trying to design a diet that is concentrated heavily on these particular foods, it is ultimately more important and more practical to simply know what foods NOT to eat.

There are certainly individual food intolerances and sensitivities that may contribute to inflammation, as well.  Self-experimentation, often done by using elimination diets and reintroduction of potential culprits (i.e. the Scientific Method), can be used to uncover food sensitivities/intolerances.

It appears that we have the best evidence for the following principles:

Effect of other lifestyle factors

Given that chronic inflammation is associated with development of chronic diseases such as obesity, diabetes, and cardiovascular disease, it is imperative to address a wide range of lifestyle factors in order to optimize health.