There are basically two fuels that can be utilized by the human body for energy: carbohydrates and fat.  The vast majority of people are routinely utilizing carbohydrates as their fuel and only rarely, if ever, tap into their fat stores for energy.  That can be an issue if one is trying to lose weight (fat), so it’s important to understand what it means to be fat-adapted and how to reach that state. 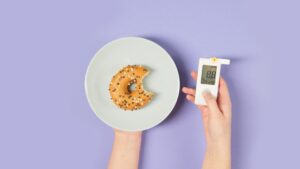 All carbohydrates break down to glucose when they’re digested, and that glucose gets absorbed into the bloodstream.  When glucose is present in the blood, the body preferentially metabolizes the glucose rather than burning fat.  This strategy makes sense, because it’s important to regulate the level of glucose in the body, as we know that a state of high glucose in the body is toxic, as we see in diabetes.  Also, when glucose is abundant, it doesn’t make sense to burn fat, but rather to save the fat for a situation where there is no other fuel readily available, e.g. a period of famine.

If you are always eating carbohydrates, there is a steady stream of glucose that must be used as the source of energy.  Whatever excess glucose is not needed for immediate energy needs can either be stored as glycogen or stored as fat. 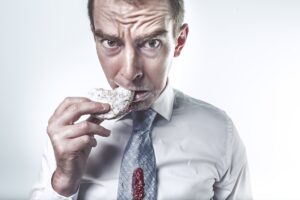 utilizing glucose as the energy source, your body also becomes less efficient at burning fat, simply because the machinery used to utilize fat as a fuel basically becomes downregulated since it’s not being used regularly.  This is the situation for most people, as people tend to maintain a rather steady supply of carbohydrates in their diet and have poor metabolic flexibility.

You’ve probably heard of marathon runners “bonking” or “hitting the wall”.  That’s a situation where the runners have depleted their glucose and glycogen (stored glucose) and then their bodies do not readily tap into their stored fat.  This is the reason why endurance athletes have traditionally engaged in carbohydrate loading prior to big events, with the intention of loading up their glycogen stores.

How much energy is stored in our bodies? 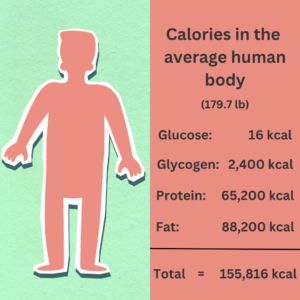 There is only about 16 kilocalories of glucose present in the bloodstream.  Beyond that, the human body is able to store approximately 600 grams of glycogen.  This amount varies quite a bit among individuals and depends largely on body mass, diet, fitness, and recent activity.  The glycogen is primarily stored in muscle tissue, and that 600 grams is roughly equivalent to 2,400 kilocalories.

In contrast, there is substantially more energy stored as fat, estimated at ~88,200 kilocalories for the average-sized person.

Even if marathon runners who “hit the wall” have lower body fat than the average person, there is still an enormous amount of calories on their bodies, and yet those fat calories are not available to fuel the endurance event.

Here’s an analogy to understand this situation.  Consider a tanker truck that contains thousands of gallons of fuel and it runs out of gas from the relatively small gas tank in the cab. Despite the enormous amount of fuel available in the tanker trailer (akin to our fat stores), the tanker truck can no longer function because the cab has run out of fuel in its small tank (glycogen stores).

In order to access the energy stored as fat, one’s body must be re-conditioned to utilize fat as a fuel –what we refer to as fat adaptation.  Fat adaptation is possible only when you force your body to utilize a different fuel other than the steady stream of carbohydrates that it is accustomed to using.

We are all capable of burning fat, just not very efficiently after not having done so for long periods of time.  It appears, however, that our bodies do run very efficiently on fat when trained to do so.  In fact, the ultra-marathon community, as well as many other athletes, has learned the strategy of fat adaptation and is using it to their advantage, such that fat-adapted athletes are now the ones winning races and setting records.