Over the last several years, fatty liver disease has been on the rise and has become the most prevalent liver disease in the world, affecting an estimated 25% of the world’s population.

Fatty Liver Disease is essentially human foie gras – enlarged fatty livers of geese who are force-fed large amounts of corn due to its high starch content.

The diagnosis of Non-Alcoholic Fatty Liver Disease (NAFLD) is made when fat infiltrates more than 5% of the liver in individuals without a significant history of alcohol consumption, although even a much smaller amount of fat appears to adversely affect metabolic health.  It can be visible on imaging studies such as ultrasound, CT, and MRI, depending on how much of the liver is affected.

It’s not surprising that it affects virtually everyone (90%) with diabetes, as fatty infiltration of the liver is really just another manifestation of Insulin Resistance.  Fatty liver is one component of visceral fat — the very unhealthy fat that surrounds our organs and is strongly associated with cardiometabolic disease.

Fatty Liver can progress to inflammation, fibrosis, cirrhosis, and liver cancer.  The majority of deaths caused by fatty liver, however, are from cardiometabolic complications.  Not only is fatty liver a consequence of Insulin Resistance, but also fatty liver worsens insulin resistance.

Fatty liver disease is not just a problem of adults.  An estimated 7.6% of all children and >30% of obese children are affected.  Long-term follow-up shows that these individuals face higher mortality rates, diabetes, cardiometabolic disease, and cancer.  Interestingly, the major contributor to mortality is not liver disease, but rather cardiovascular disease from the metabolic consequences. 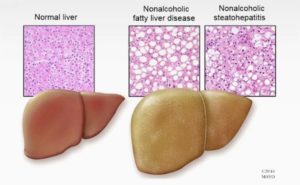 Though traditionally called NAFLD, the name has been changed to a more appropriate term, Metabolic Associated Fatty Liver Disease (MAFLD), because it better describes the important connection with Insulin Resistance.

Diet is recognized as a critical factor in the onset of disease.  Simple sugars are the predominant contributor, especially sucrose (table syrup), high fructose corn syrup, and fruit.  This effect is even more pronounced when the diet consists of carbohydrates and seed oils.  History of fast-food intake over the last 25 years is also associated with increased risk of fatty liver.

Fructose is a major contributor due to its requirement for metabolism via the liver, in which fructose undergoes conversion to liver fat (triglyceride).  Similarly, alcohol, also metabolized only in the liver, can also cause fatty liver.

The standard of care for treatment of fatty liver has been weight reduction, aiming for a 10% drop, along with decreasing dietary intake of sweets and saturated fats.  Weight loss, though effective, does not appear to be the optimal target to reverse fatty liver, as dietary interventions independent of weight loss are even more effective.

A study randomizing individuals with fatty liver to one of three groups showed that a low carb high fat diet (LCHF), or a 5:2 intermittent calorie restriction diet were superior to the standard of care in reducing fatty liver, body weight, and measures of insulin resistance.

A fruit-rich diet (high in fructose) has negative impact on individuals with fatty liver – consuming at least 4 servings of fruit daily versus less than 2 servings per day.  High fruit intake caused an increase in fatty infiltration of the liver, along with worsening of liver enzymes, glucose, insulin, triglycerides, and HDL.  Conversely, the low fruit intake group had decreased fatty liver and improvement in all measures.

Reducing fructose consumption in children for only 9 days, while maintaining the same number of calories and remaining weight-neutral, significantly decreased liver fat in children, with favorable impact on other metabolic measures as well.

Other important interventions for fatty liver include elimination of alcohol and processed foods.

A somewhat surprising finding is that there appears to be a benefit from coffee consumption in protecting against fatty liver and progression of disease.  In fact, consumption of at least 2 cups of coffee per day appears to protect against all forms of liver disease.  Though this promising finding has appeared in multiple studies, the mechanism is unknown, and more research is necessary to thoroughly evaluate this hypothesis.

Fatty liver disease is a consequence of insulin resistance and is driven by excess carbohydrate intake, especially simple sugars.