Another medication lauded for its potential as a weight loss drug was approved last month, called tirzepatide.  It is an injectable medication, to be given once weekly, and is approved for use in type 2 diabetes, but likely to be popular for weight loss as well.

Though with similar effects as some pre-existing drugs (semaglutide, liraglutide, exenatide, etc.) targeting diabetes and obesity, tirzepatide is considered a first-in-class medication for demonstrating action on both the glucagon-like peptide-1 (GLP-1) and glucose-dependent insulinotropic polypeptide (GIP) receptors.

Compared to other conventional diabetes medications, GLP-1 agonists have demonstrated better lowering of glucose and HgbA1c with decreased risk of hypoglycemia (low glucose).  Their tendency to cause weight loss is thrusting them into a significant role in the management of obesity.

It’ll be no surprise to hear, though, that nothing comes without risk.  In the case of tirzepatide, it is known to cause thyroid C-cell tumors in rats, and it remains unknown if there is cancer risk in humans.  Also, it has not yet been studied in patients with history of pancreatitis, an issue with other GLP-1 agonists.

Retail price is set at $974.33 per month, or $12,666 per year, putting them on the impractical side of utility, unless you meet the criteria established by your insurance company and jump through their hoops.

Semaglutide is the GLP-1 agonist that was approved in June 2021.  It was hailed as an impressive weight-loss drug based on data from research studies.

Over half of all individuals on semaglutide lost at least 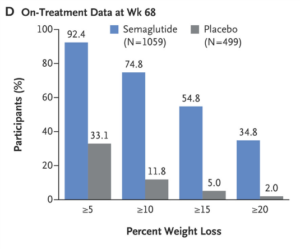 In combination with intensive behavioral therapy for weight loss, individuals (total n=611) in another study (note: funded by Novo-Nordisk) on semaglutide lost 16% of their body weight compared to 5.7% in the placebo control group.

As obesity is considered a chronic disease, a growing sentiment among the obesity medicine community is that obesity medication should be continued long-term rather than for short durations only. 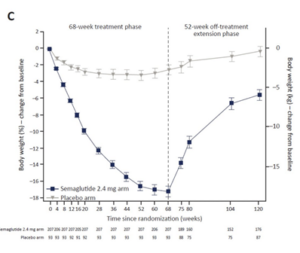 When semaglutide and lifestyle interventions were discontinued on the individuals from the STEP 1 trial, they regained the majority of their weight lost.  After having lost a mean of 17.3% of their bodyweight on semaglutide and 2.0% on placebo at 68 weeks, they regained 11.6% and 1.9% of weight, resulting in net losses of 5.6% and 0.1% at week 120.

It’s important to note that the participants were enrolled in the 52-week extension phase from September 2019 to April 2020.  Thus, there was considerable overlap with the COVID-19 lockdowns starting early 2020, the significance of which cannot be discerned.

How do GLP-1 agonists work?

Semaglutide, and other GLP-1 agonists, work by a number of mechanisms.  One primary mechanism is slowing the emptying of the stomach, resulting in a sense of fullness over a longer period of time.  Even when eating less food than usual, individuals experience suppression of their appetite.

These medications also increase the uptake of glucose by muscle tissue, decrease glucose release by the liver, and increase satiety at the level of the hypothalamus.

They are also believed to increase leptin sensitivity, as determined by decreased leptin levels in non-diabetic women with obesity who lost weight on exenatide.  Resistance to leptin, the “satiety hormone”, is considered a prominent driver of obesity.  Leptin levels typically decrease after weight loss, which is hypothesized to drive increased hunger and, as a result, weight regain.  GLP-1 agonists appear to prevent that significant drop while improving leptin sensitivity and thereby promote sustained weight loss. 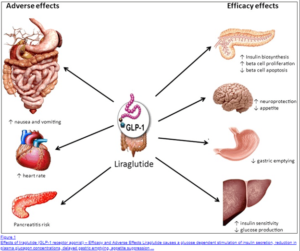 The most common side effects include nausea, vomiting, and diarrhea, necessitating a slow titration of the dose to ensure tolerance.   Other side effects may include dizziness, headaches, increased heart rate, infections, and dyspepsia.  The common side effect of nausea is believed to contribute only minimally (<0.1 kg) to the observed weight loss (data from semaglutide study).

The GLP-1 agonists are an impressive new option for weight loss, especially in the setting of type 2 diabetes due to their glucose-lowering benefits.  There are now 8 approved medications in this class, including the newest tirzepatide which also acts on the GIP receptors.

As with any pharmaceutical product, GLP-1 agonists should not be depended upon as the sole agent to achieve weight loss, but rather viewed as an adjunct to other treatment modalities — nutrition, physical activity, sleep, etc.

With consistent evidence for both glucose lowering and weight loss, these agents are sure to remain popular as long as they are accessible.