How to Optimize Your Health with a CGM 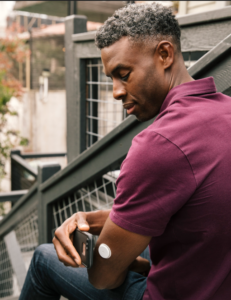 has come a long way from when it was first recognized as a useful tool for managing diabetes.  The use of Continuous Glucose Monitors (CGM) has revolutionized diabetes care by its ease of use and real-time data.  They are gaining ground on conventional Fingerstick Glucose Meters as a more convenient method of glucose monitoring.

What is a Continuous Glucose Monitor (CGM)?

The standard method of monitoring glucose has long been and still is the use of intermittent measurement by blood samples obtained by fingerstick.  This method requires using a lancet to puncture the skin of one of your fingertips in order to produce a small drop of blood, which is then applied to a test strip that is inserted in the glucometer reading device.

Just as the name implies, it provides a continuous record of one’s glucose, thereby giving one a real-time look at your glucose levels rather than only intermittent snapshots.

Because glucose meters give only a snapshot of the glucose level in the instant of when the blood specimen was obtained, standard glucose monitoring doesn’t show the whole picture of what your glucose trends are.  In contrast, the CGM shows the entirety of data, thereby allowing you to see the ups and downs over time.

CGM use in diabetes

There are multiple studies demonstrating improved control of diabetes in individuals using CGM’s compared to the standard intermittent fingerstick testing.

CGM’s are especially valuable in individuals who are using insulin, as the continuous real-time data allows for more intensive monitoring and some devices even alert the user to abnormally low or high glucoses.  Note that there is an inevitable delay in glucose values (several minutes) when measuring the interstitial fluid compared to blood glucose.

There is extensive data on the benefits of CGM’s in the management of diabetes, as well as improving length of stay (LOS) and outcomes in hospitalized patients1– Decreased A1c in Type 1 diabetics treated with insulin  – Decreased A1c in Type 2 diabetes treated with basal insulin  – Lower A1c and fewer ER visits for low glucose in patients with diabetes managed with insulin.

Also, there is a study in progress to assess whether CGM’s improve outcomes in Gestational Diabetes.

Because of their convenience and the availability of real-time data, CGM’s have also had a positive impact on quality of life for individuals with diabetes, contributing to overall well-being, less stress, less risk of hypoglycemia, better sleep, and better glucose control.

Are CGM’s useful outside of diabetes?

The astute researcher may note that there are no rigorous research studies (Randomized Controlled Trials) looking at outcomes related to CGM use in non-diabetics.  That said, there is evidence that the optimal average glucose level is considerably lower than the threshold for diagnosing diabetes and that the risk of cardiovascular disease increases even below the threshold for pre-diabetes.

That should alarm you.

Said in another way: Even an average glucose level that is considered “normal” may put you at risk for cardiovascular disease.

It’s important to recognize that glucose tolerance (i.e. insulin resistance) exists on a continuum.  The criteria for diagnosing diabetes and pre-diabetes are a human construct and are somewhat arbitrary, based on our best guess of when a high glucose is considered a disease state.

As referenced earlier, the use of a CGM can improve glycemic control in individuals with diabetes.  Similarly, a CGM could assist individuals with managing their glucose tolerance such that they can avoid progressing to diabetes.

It’s short-sighted to say that a CGM should be used only by individuals with diabetes.  Anyone with insulin resistance is likely to benefit from the use of a CGM by giving them insight into their glucose tolerance and the effects of their daily behaviors.

Granted, there may be decreasing marginal returns for healthier, more insulin-sensitive individuals, but considering that 93% of adults in the United States have poor cardiometabolic health, imagine the potential benefit of more widespread CGM use.

There is reasonable evidence to support the following goals:

CGM use to optimize health

The Continuous Glucose Monitor can give you abundant, real-time glucose data.  The following are various principles for using this data to improve various aspects of your metabolic health.

Evaluate the impact of food intake, as well as medications, supplements, etc.

See how these factors affect YOU, rather than just trusting what someone else tells you will happen.

CGM’s are the most effective method for measuring Glucose Variability, the difference between the highest and lowest glucose levels.  Aim for a relatively flat line; avoid peaks and valleys.

Use CGM as an accountability tool and for motivation

Other tips for using CGMs