One of the most important principles for metabolic health is that of metabolic flexibility.

Metabolic flexibility is the ability of our bodies to switch between utilizing different nutrient energy sources (carbohydrate and fat) depending on what is available at the time, including the possibility of periods of fasting.  Many organisms have adapted strategies to tolerate the variable supply and quality of nutrition in their environments.

The survival of our species depended on metabolic flexibility, as the hunter-gatherer lifestyle never had guaranteed yields.  Our ancestors undoubtedly enjoyed periods of abundant food supply while also suffering periods of famine.  This fluctuating food supply required the ability to efficiently obtain and store nutrients when available, as well as to endure periods of food deprivation by utilizing stored energy.

This design is akin to the hybrid car technology, by which vehicles run on battery power as long as it is available.  Once the battery power is depleted, the vehicle shifts to its backup power source – gasoline.  The flexibility of these vehicles being capable of utilizing two different power sources allows for longer continuous running times.  Similarly, the ability of organisms to run on both carbohydrates and fat allows for improved survival.

Now that we live in a culture of abundance, our population has become metabolically inflexible.  With the unprecedented continuous availability of food products and especially processed foods, the average person is nearly always running on carbohydrates and thus remains inefficient at fat metabolism.  The consequences of this inflexibility are reflective of the body’s decreased efficiency at metabolizing fat: 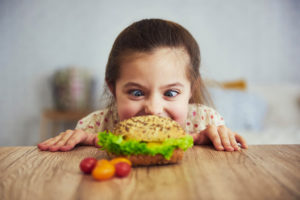 Organisms that require frequent or continuous intake of nutrients must remain in environments that provide a ubiquitous supply, e.g. grazing animals.  In contrast, organisms that are capable of consuming large, satiating meals and that have adapted strategies to alter their metabolism in response to food availability are able to tolerate environments in which they may encounter periodic food deprivation.

When one is metabolically flexible and thus capable of metabolizing either carbohydrates or fat as fuel sources, there is significantly more freedom in terms of when and how often one needs to eat.  When fat-adapted, it is possible to use one’s own fat stores as fuel rather than having to consume regular meals.  Thus, a fat-adapted state allows one to endure periods of fasting without significant difficulty.  Simply put, our bodies are meant to eat food when it is available and to burn stored energy as fuel when food is scarce.  This design enables a continuous supply of energy at all times, independent of food availability.

Can it go the other way?

While most people struggle with metabolizing fat, it is also possible to lose one’s adaptation to metabolizing carbohydrates, which can occur from a prolonged diet of carbohydrate restriction.  It appears that the enzymes and other regulatory factors of carbohydrate metabolism can be down-regulated in a similar fashion to those for fat metabolism, potentially to the point of causing a state of physiologic insulin resistance, which may result in elevated glucose levels following ingestion of carbohydrates.

How does one improve metabolic flexibility?