The conventional wisdom is that distance running is a healthy behavior and thus confers protection against heart disease.  Look no further than the streets around your neighborhood or the lineup of treadmills at any local fitness center to see that the general population staunchly believes that running is good for one’s health. 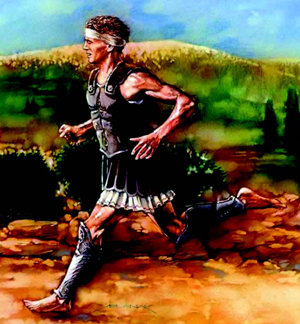 The origin of the marathon

How ironic though that the marathon is, in fact, based upon the story of the ancient Greek runner Pheidippides, who died after running from Marathon to Athens, Greece, to deliver news of a military victory.  [Note: there is speculation that Pheidippides actually ran 300 miles – Athens to Sparta, then back – in the days leading up to the final 26 miles.]

In 1976, Tim Noakes presented 6 cases of heart attacks from marathon participation, 1 of which was fatal, calling for an end to the exaggerated claims that marathon running provides complete immunity to heart disease.

As of 1987, there were 36 reported cases in the scientific literature of heart attacks or sudden death in marathon runners, half of which occurred either during or within 24 hours of an event or a long training run. 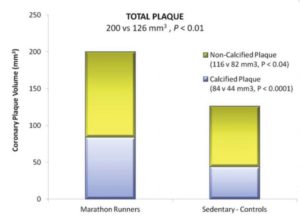 men who had run at least one marathon yearly for 25 consecutive years had increased coronary artery plaque compared to sedentary controls [see graph].  Another study on a similar population demonstrated that the conventional risk factors predicted the degree of heart disease rather than the volume of marathon running.

Among another set of marathon runners aged 50+ and having completed at least 5 marathons in the prior 3 years, 36% of them had Coronary Artery Calcification (CAC) scores over 100, indicating moderate coronary artery disease – which was the same as in age-matched controls.

The takeaway message is not to say that one should not run, but rather to understand that running does not guarantee good health.  It appears to be a situation where the dose makes the poison.  While many studies demonstrate a health benefit from running, there may be a point beyond which an increase in volume of running actually increases harm.

We know little of the other health behaviors of these individuals, but it’s apparent that distance running itself does not protect one against heart disease.  Despite a rigorous exercise routine, some athletes have poor nutritional habits and/or other detrimental habits, lending credence to the adage:

You can’t outrun a bad diet.